by Esme (as dictated to her father) 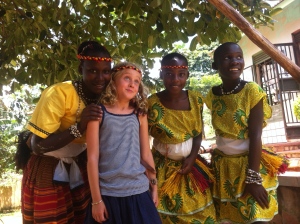 Uganda is a sweet, spiritual place. But there are a lot of people who have misfortunes in their life. Many Ugandans are very poor. Sometimes, teenagers have kids, and sometimes kids are treated badly. Some can’t afford to go to school. Some are orphans. We met kids who work in a rock quarry—crushing rocks with a hammer or carrying rocks up steep cliffs.

We visited a group of kids outside of the capital city, Kampala, who went to classes at an organization called the Naggalabi Indigenous Community Theater, also known as NIT. The teachers at NIT, Eric and Sylvie, teach kids from the local community traditional Ugandan dances and to play drums from traditional communities. They also encourage the kids to stay in school and to talk about their problems.

The drive out to visit the kids at NIT took a long time because we got lost. When we finally arrived, the boys greeted us by standing in two rows and drumming fiercely and the girls by doing a traditional welcoming dance. It was a unique and vivid welcome.

We ended up staying for six hours. During that time, the kids at NIT performed several dances from all regions of Uganda. In my favorite dance, the girl dancers put more and more pots on their heads. They started out with two pots and by the time the dance was over, the girls had different amounts of pots balancing on their heads: one had three, one had five, one had six, and one had seven pots balanced on her head while dancing!  Follow this link if you want to see some of the dance:

Some of the kids were especially friendly to me. One boy took me by the hand and showed me how to dance, but I was terrible. 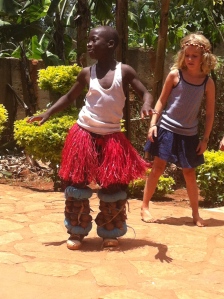 Later, I taught the kids poetry. I wrote a few acrostic poems and asked them to read them, and then a few of the kids tried to write poems of their own.

For lunch we had a big feast cooked over an open fire. Eric and Sylvie and the kids treated us like really special guests. The end.